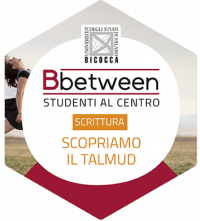 The owner of this Badge has acquired knowledge and feeling for certain elements of the Hebrew culture and religion; furthermore, by taking part in reflections that help to place these elements in the Western context, he or she has been able to discover the cultural and artistic contamination between the two dimensions. The Hebrew culture, in reality, has left its mark, even if not immediately visible, on Western religious, cultural and artistic tradition. The above-mentioned knowledge and feeling have been acquired through attendance of the Bbetween Writing: Discover the Talmud course. With the translation into Italian of the Babylonian Talmud, started with the publication of the subject matter on the festival of Rosh HaShanah, the Bbetween Writing - Discover the Talmud develops knowledge of it, by analysing four of the six orders which make it up. Therefore, the course is divided into four stages: The Sabbath and the festivals (from 26 October to 30 November 2016), Ritual purity and impurity (second term, Academic Year 2016-2017), Matrimonial law (first term, Academic Year 2017-2018), Civil and criminal law (second term, Academic Year 2017-2018). Each stage is held in five encounters of 2 hours each. The first stage, The Sabbath and the festivals, deals with the Hebrew festivals. These take place according to the seasons, especially in spring and autumn; from their historical, agricultural and religious value and inspired by the great events of the old testament, they mark the holiness of time throughout the whole of the year. The second stage, Ritual purity and impurity, starts from study of the order of the Talmud devoted to ritual purity and impurity. Ritual impurity does not represent a moral judgement of the person, but is rather a natural part of life, which it is conceptually associated with. Entering a state of ritual impurity does not constitute a transgression of a legal, nor of a moral, nature, but concerns rather the physical contact with the temple, sacred place or sacred objects or food. The third stage (Matrimonial law), devoted to matrimonial law,starts from the concept of marriage in Hebraism, “small temple in honour of God within which the precepts are activated for procreation, raising children, mutual help and observation of all the obligations laid down by the Ketubah. It deals with the rights and duties of the spouses, women’s rights and a look at divorce. The final stage (Civil and criminal law) deals with the Neziqìn, the order of the Mishnah devoted to civil and criminal law. This deals with regulations as presented in the Talmud and verifies its modern-day application, as well as the articulation of justice in Hebrew law.

The BbetweenWriting: Discover the Talmud Badge is a participation Badge. It is issued to the students of the University of Milano-Bicocca and to others, who have attended at least one of the four stages offered and have taken part in at least four of the five encounters on the programme. There is no limit to the number of attendees, depending on the capacity of the teaching rooms. Attendance of the course is free of charge.

The owner of this Badge has demonstrated feeling and interest for these topics: Talmud; Hebrew religion; history of Hebraism; Hebrew language; Hebrew exegesis. The owner of this Badge has also acquired the following KNOWLEDGE: structure of the Talmud; history of the Talmud; Hebrew glossary; Hebrew calendar; translation of the Talmud into Italian. In particular, according to the stage attended, the owner of this Badge has acquired one or more of the following SPECIFIC ASPECTS OF KNOWLEDGE: meaning and celebration of the Sabbath; meaning and celebration of the festivals; classification of pure-impure and its historical evolution; rules of ritual purity; civil and criminal law in the Talmud and its application today; articulation of justice in Hebrew law; institution of the marriage pact and its symbols in the wedding; historical evolution of the current ritual and law in the arrangement system.