In February 2018, We Are Open Co-op was commissioned by Inter-American Development Bank (IDB) to deliver an in-person participatory workshop on Digital and Alternative Credentials. The workshop was designed for a mixed audience; some participants had never heard of Open Badges, whilst others were already working with them.

The first day consisted of the following six sessions plus a plenary to close, and was facilitated by Doug Belshaw and Bryan Mathers.

The story of how the workshop went in contained in this blogpost.

All the outputs from the workshop are also available.

The first session involved laying out the aims of the day, and having a look at each other's personal journeys. This involved an individual exercise to draw out the story of each participant's career. Following this, Doug and Bryan gave examples of "credential sized holes" in their own journeys; things that deserved recognition but did not relate to a credential. 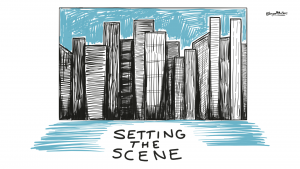 Exercise: Drawing your own journey

The participants were tasked with drawing out their own journey, spotting places where a credential (or other way of signalling new knowledge / skills / behaviours) would have been valuable.

Session 2 - How has your world changed?

In session two, the participants were focused on finding commonalities through human-centred design; individually captured, and democratically organised. The participants were tasked with writing on sticky notes, the changes they can see happening in the world of work. The stickies were then stuck on the wall and organised by the participants to reveal both alignments, and outliers. 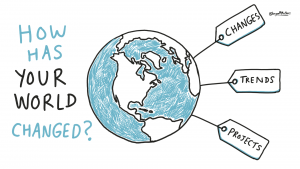 Participants stick the post-it notes to a wall, and then democratically organise them into 'clusters' which are then given a name. These are areas/problems to focus on in the later session.

Session 3 - Stories from the front line

In the third session we looked at a few examples of organisations using badges in different ways. The following case studies provided the main focus: 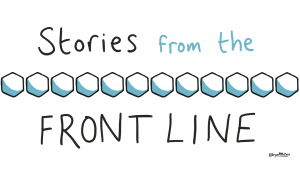 Session 4 - Getting up to speed with Open Badges

The fourth session was kicked off by acknowledging some of the elephants in the room: competency-based learning, blockchain, and gamification. To tease this out, a human spectrogram process was used.

Following that, the participants were taken on an educational journey asking What are Open Badges?, followed by Q & A. 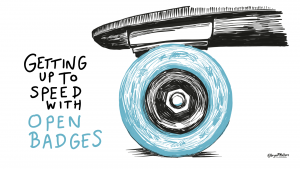 The focus of session 5 was to help pairs of participants prototyping their first badge. To do this the Badge Bloom tool was used. This takes the user thought a lightly structured visual process of capturing a badging idea. Each idea could then be shared with the other participants.

Session 6 - From Badges to Pathways

In session 6, the focus widened to look at stringing badges together into badge pathways. After some instructional dialogue, the participants were asked to use a flip chart to take their badge idea further - as part of a pathway. 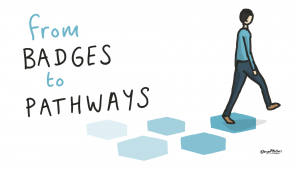