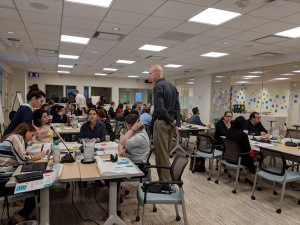 In February 2018, We Are Open Co-op was commissioned by Inter-American Development Bank (IDB) to deliver an in-person participatory workshop on Digital and Alternative Credentials. The workshop was designed for a mixed audience; some participants had never heard of Open Badges, whilst others were already working with them.

The first day of the workshop consisted of the following six sessions plus a plenary to close, and was facilitated by Doug Belshaw and Bryan Mathers.

The story of how the workshop went in contained in this We Are Open blogpost.

Activity 1 - Drawing your own journey

The participants were tasked with drawing out their own journey, spotting places where a credential (or other way of signalling new knowledge / skills / behaviours) would have been valuable.

Participants stick the post-it notes to a wall, and then democratically organise them into 'clusters' which are then given a name. These are areas/problems to focus on in the later session.

Activity 3 - Tricky Topics: the Elephants in the Room

A Human Spectogram technique was used to explore some of the tricky terms in and around digital credentials.

Participants were introduced to Badge Bloom - a tool that helps the user to prototype and share a badge idea.

Here are some of the ideas from the day:

Activity 5 - Break down or Build on

After participants were introduced to the idea of Pathways, they were encouraged to break down or build on to their original badge idea from the previous activity. 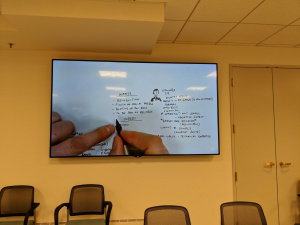 The second day consisted of four surgery sessions to explore the use of micro-credentials in specific IDB projects. Participants brought their thinking from the workshop, together with materials to explain the nature of their project.

The live drawing from each of the sessions is captured below: